This may be a long post since I haven't really posted for several months. I know I've been a recluse lately and I really have no excuse other than procrastination. After the miniature show in September I listed what didn't sell in my Etsy shop and it's pretty much been sold out for awhile.  Then with that money and since my birthday was in October, I bought a new toy....I got a laser cutter!  I'm super excited about it!  It's a "cheapo" Chinese laser cutter and it's awesome!  I've spent many hours online and on Youtube researching info about how to use it and tips, tricks etc.  I've also had to learn how to use vector design and run into many problems with sizing and saving files etc.  For some reason, the program that came with the laser cutter doesn't recognize the type of file that is typically used with a laser cutter, so I've had to figure out how to get around that by using the free two week trial of Corel Draw (of course that expired and I had to buy the program). Many thanks to Pepper and her laser cutter expertise for her advise and tips!

Here are a couple of my trials: 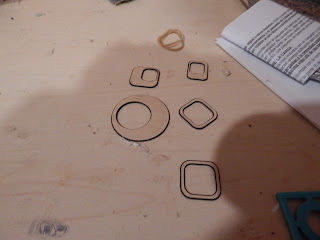 I plan on using these as little picture frames. 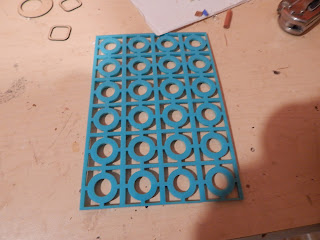 And using this as a room divider.

I've just recently officially finished a few Mid-Century Broyhill Brasilia Inspired mid-century modern pieces with the use of the laser cutter to cut the design out of teak veneer.  I adhered the teak veneer to 1/16" thick walnut to make the doors. 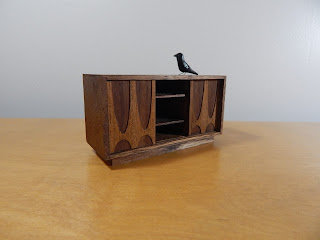 The Eames bird is from Philip Nuveen on Etsy 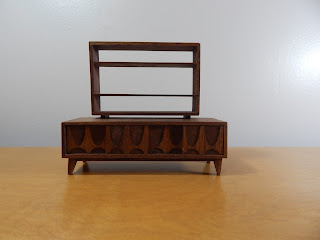 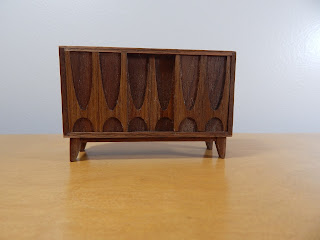 I'm thrilled about how these turned out!


I have decided not to make any commitments this year as far as mini-ing goes. I adore the new HBS Creatin Contest Kit and I already ordered it, however I'm not making any commitment to enter the contest. I never did get any further with last year's Backyard Bungalow kit.

A few years ago, I won the Artply Highland Dollhouse kit on Ebay, sadly all of the major parts like floors and walls were missing. At the time Call-Small was kind and generous enough to send me the specs of the missing pieces so that I could replicate them.  I just never got around to making them.  Last month there were actually TWO of them listed in Ebay.  One was listed as a buy-it-now for $300.00 and one was an auction which I won for $53.00 plus shipping. I took inventory and all the pieces are there! 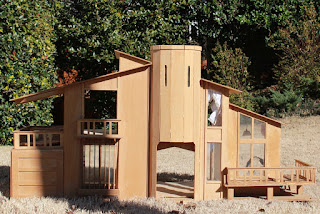 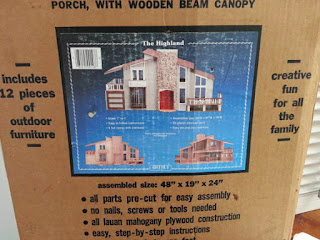 Even though things in my life have been crazy busy, I have had time to work on a few things mainly the Citadel.  I've been working on the kitchen which is very close to being done.  I bought an exhaust fan kit from Elf Miniatures, however I'm not happy with how it turned out (only because of my own impatience). I'm going to just order one ready made. Otherwise It's pretty much finished. 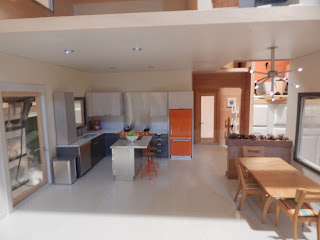 I've also been working on the bathroom. It still has a way to go but at least the larger pieces are in place. I'm so in love with the light.  It was designed by Mini Dork of Modern mini houses.  She has a shop on Shapeways where she has designed some really awesome modern 3-D printed pieces. 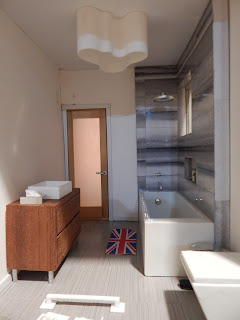 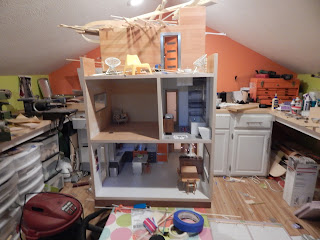 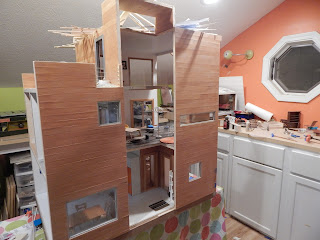 My goal (no commitment) is go get this finished before I start any additional projects. 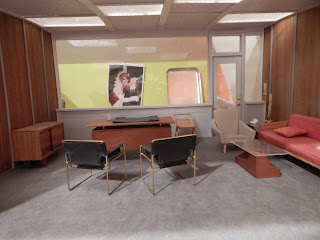 And last but not least, the Mad Men inspired office has it's furniture and lighting.  I still need for figure out the roof and accessorize. Goal #2: also have this done before starting another project! Yes, that's a picture of me and my son at Halloween several years ago in the background...It's hard to believe he's taller than me now (maybe not so hard to believe...I'm only 5'2")!

So there is the last part of 2016 and the beginning of 2017 in a nutshell.I hope everyone has a great holiday season and Happy New Year!
Posted by Mad For Mod at 6:02 PM