Ever since I sold the Mid-Century Bungalow a few years ago. I've wanted to do  another Mid-century modern build.  Here's what the MCM Bungalow looked like: 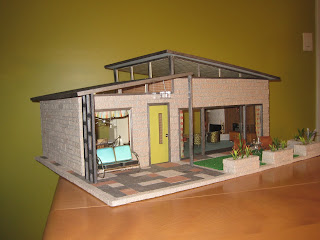 As you can see it's similar to the HBS Craftsman Cabin which is this year's Creatin' Contest kit. 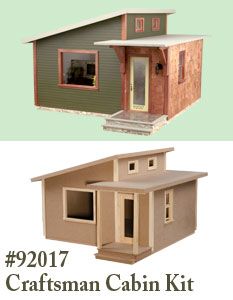 I finally decided to start the build even though I have three unfinished projects that I'm "working" on. I haven't decided if I will enter the contest this year.  I guess it depends in whether or not I actually finish it. 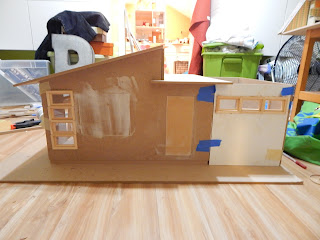 I've made quite a few changes to the kit.  First I closed up the front door, picture window and the window on the back side.  I also cut two new doorways and all new windows. 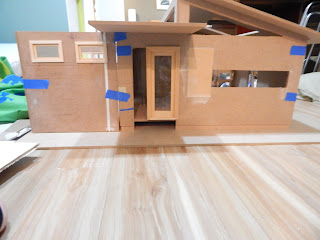 I moved the front door to the other side and put an addition on the left to make a bedroom and bathroom. I also made a triangular window much like the MCM Bungalow. 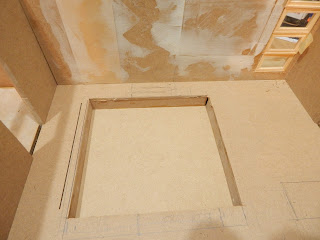 It will have a sunken living room.  I cut a square in the floor and put one inch supports under the area where I cut.  Since the kit has a raised floor this worked out perfectly. 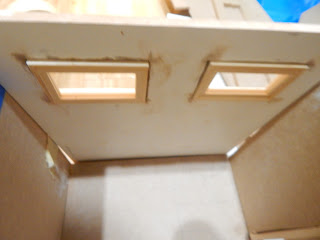 I used 1/4" fiberboard for the addition because I can't find 3/8" anywhere.  The windows are a little deeper than the walls so I will cut some mat board to thicken the walls a bit. 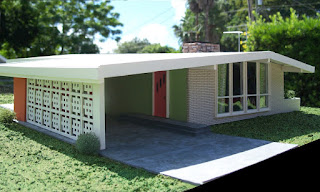 The angled roof line will be extended to make a car port a lot like this one. 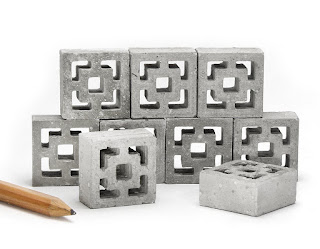 I really wanted to use these mini concrete breezeblocks from Mini Materials for the realism, but I think they will mage it a little too heavy and I would need A LOT of them.  I will just do my best to make them with the laser cutter. Wish me luck!

On Friday I was doing a bit of cleaning and when I emptied my husbands trash can in his man cave and found these little metal pieces that looked just like the foil holder for tea light candles. So of course I went digging through the trash to find more. 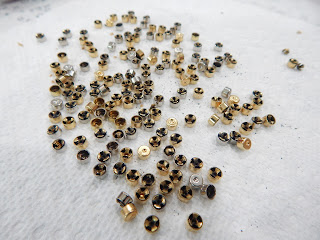 These are small pistol bullet primers that he uses to make bullets.  These are the ones that have been used.  I can't stress enough that if you want to use the same things to make tea lights...make sure they are used.  Other wise you could get seriously injured.

Any way I used a pick and removed the little anvils that are inside of them. 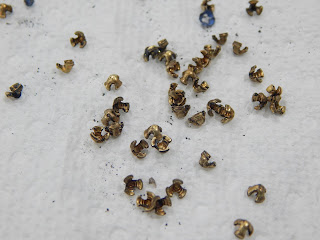 Which leaves the primer cup. 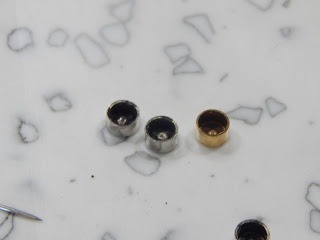 We then used polymer clay to fill the cups, 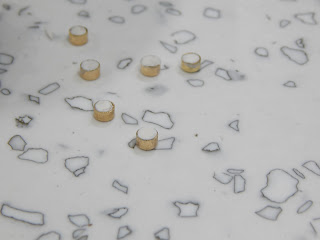 and used a little bit of mono-filament fishing line for the wicks. 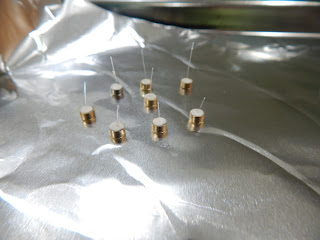 I baked them in the oven then trimmed down the wicks and... 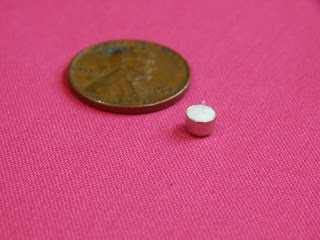 Once again as I told myself I won't go this year...I went.  Chicago is about a 3-3 1/2 hour drive from where I live so it's really hard to resist.  The lessons I learned this year are: bring more cash....a lot more and suck it up, just take a day off of work and buy the preview tickets. My plan was to go to the Three Blind Mice show on Friday and the Bishop Show on Saturday.  Which I did.


The Three Blind Mice show was mostly basic things.Here's what I found there: 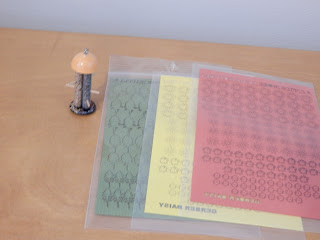 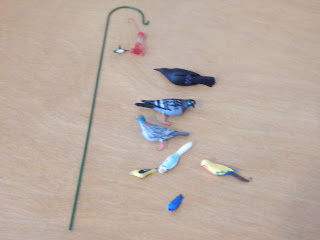 The most amazing detailed humming bird feeder with a humming bird and shepherds hook and some very detailed birds from Mini-Gems. She also has 1:24 scale and other small animals. 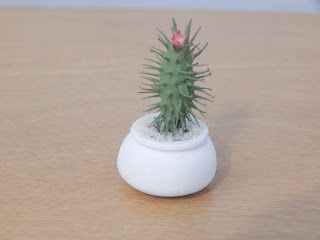 And this little cactus-I can't remember the name of the vendor.

After the Three Blind Mice show I had some dinner at Ikea - Those meatballs! We don't have one where I live yet, but we're getting one in the fall!
Then I did a little local shopping and didn't buy anything.


Saturday, I got to the Bishop Show a bout half an hour later than I expected.  I headed right to Patrizia Santi and bought my first pair of her shoes...they're amazing! I am so in love with them! 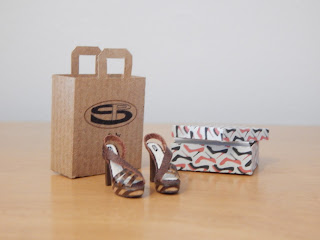 Then I rushed to Ulus Miniatures and ogled for a little bit.  I didn't bring a lot of cash and I knew I could buy some of his stuff online So I waited to see what I could spend.


Then I met up with Brae who informed me that there was a third show...of course right down the street from where I stayed the night before...wouldn't you figure.  Anyway she said it was worth it to check it out so we did....and she was right!  I so wish I had realized that the show was going the day before. I would have spent a lot more time there.


Here's what I found there: 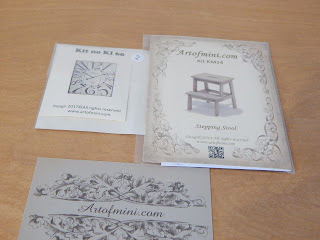 A couple of kits from Art of Mini 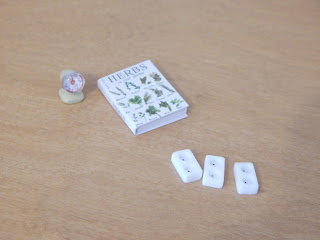 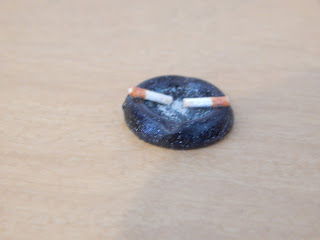 This ashtray with burned cigarettes from Cinen 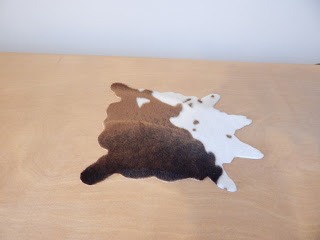 This super cow hide. I love the print and it's really hard to find a print small enough and nap short enough to look real in 1:12. Unfortunately, I forget the name of the shop.

We went back to the Bishop Show and had lunch then we went on our ways.

Here's what I found there: 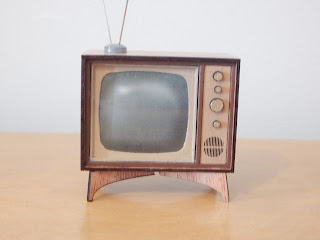 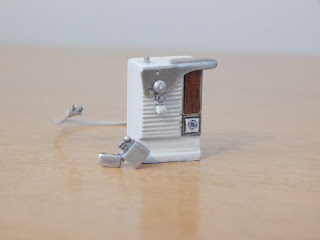 I went back to Ulus Miniatures and bought this electric can opener and Zippo lighter.  The details are amazing.. Even my husband commented on the detail. 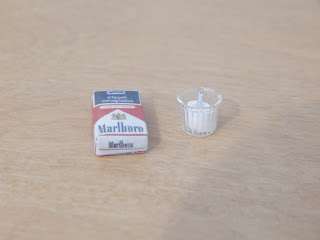 A little pack of smokes and a little votive candle from A little More in Miniatures. 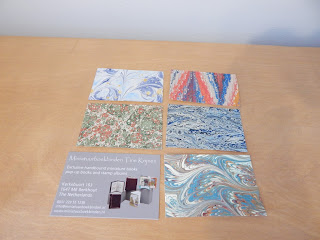 and these gorgeous papers from Miniatureboekbinden .  I plan on making modern art work with these. They're amazing and the perfect size.
Posted by Mad For Mod at 5:56 PM 8 comments: