I painted egg carton lids and ivory color that I got at Home Depot then cut the bricks with the laser so that they would be consistent.  Then I decided that was a crap ton of bricks to glue on individually and would take seemingly forever to get them evenly spaced and straight both vertically and horizontally. 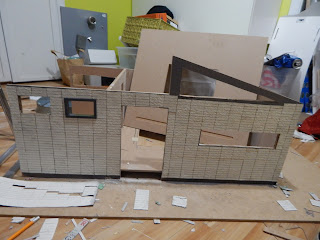 I still cut them with a laser, but didn't go all the way through so they would stay in tact and easier to keep straight. The bricks look a little dirty from the edges being singed by the laser, but hopefully I will be ably to touch them up with paint later....then I ran out of egg cartons.  The front facade took about 13 cartons to cover. I thought I was going to have to eat a lot of eggs. 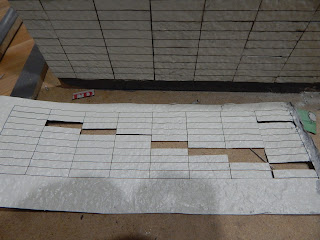 Then I tried my home made stone trick but it turned out either too thick and lumpy or too thin, plus when you paint it the paper absorbs the water and gets wavy.  You can't cut uneven surfaces on a laser cutter. 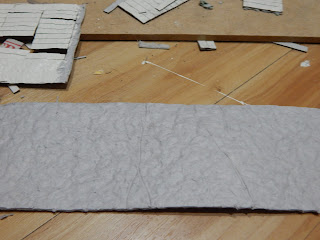 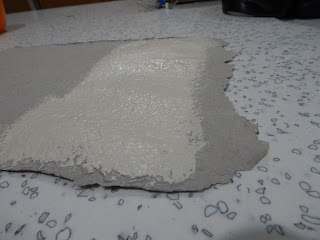 Ebay to the rescue!  I remember reading something about how you can sell things like crayons and egg cartons on Ebay so I thought I'd take a look.  Apparently you can get anything on Ebay.  I bought 25 cartons with flat lids for $15.00. I'm just waiting for them to arrive.
Posted by Mad For Mod at 9:15 AM 12 comments: